This guide will help you find resources, understand academic and reflective writing and help you prepare for your coursework and exams

Although all staff are expected to be experts in their areas of work, the amount of published material (particularly on-line) is so vast that it is impossible for staff to be able to recognise all available material. If a member of staff is suspicious about a piece of work, then an easy test is to put a suspicious phrase into a search engine – for example Google.

In the example on the previous page, the phrase “Because of their lipophilicity, together with their persistency in the environment” might be considered suspicious if it appeared in a student’s essay. This is the result of a simple search using Google: 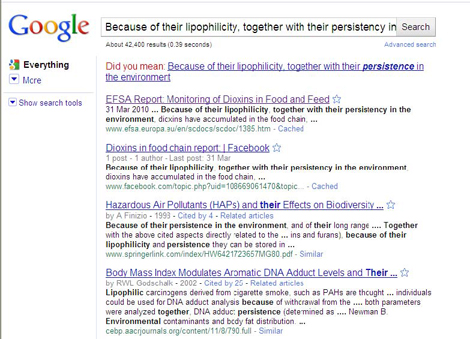 The first item listed is the source (or an earlier version of the document in this case). The lecturer could then easily go direct to the document and find the suspicious phrase and realise that the whole paragraph was copied from this source.

For more complex pieces of work where we wish to check for plagiarism consistently across a whole set of submitted material, we have access to a web site known as ‘Turnitin’. This automatically checks submitted work against other published sources. The site also stores submitted material so that if there are attempts to make use of another person’s essay, either from the same year or from previous years (or from another university which is also using Turnitin!) then this can be identified.

The following shows the results of submitting the above examples to Turnitin. First there is a summary page which gives an indication of the likely concern with the material. The key element is the ‘Report’ column. The column indicates a ‘Similarity Index’ – a high value (up to 100%) indicates that material is ‘similar’ to other documents. In this case it is clear that it has identified that the material in Example 1a has been nearly all copied. Examples 1b and 1c have included the references but still show a very high similarity score. In Example 1d, where some of the words were changed, it is lower but still high. Even Example 1e, where a significant attempt was made to introduce some personal analysis, has still a relatively high score of 45%. 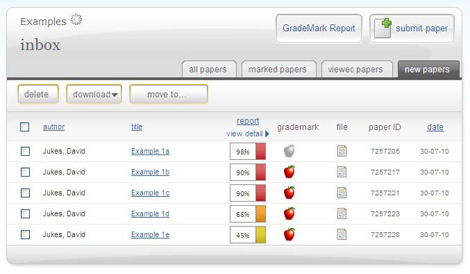 The scores themselves are however only an indication of a possible concern. The site provides a detailed report as to where the similarity comes from. The following are the start of the detailed reports for Examples 1a-1e: 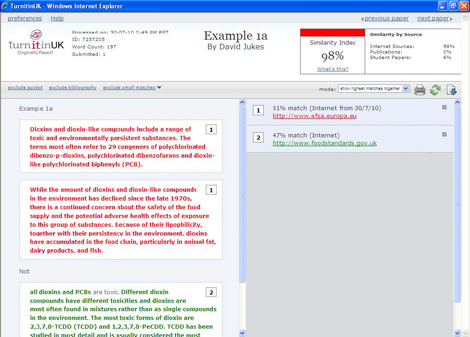 The two sources have been identified and are given as links so that the lecturer can check them. 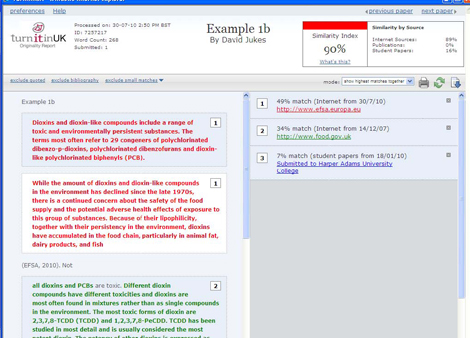 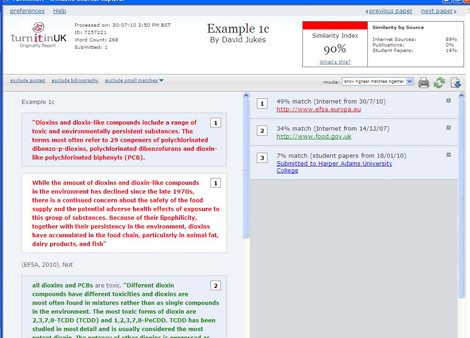 Notice that in these two cases (Examples 1b and 1c) Turnitin has spotted a similarity to another submission from Harper Adams University College. The specific point was to the reference to the FSA web page on PCBs. 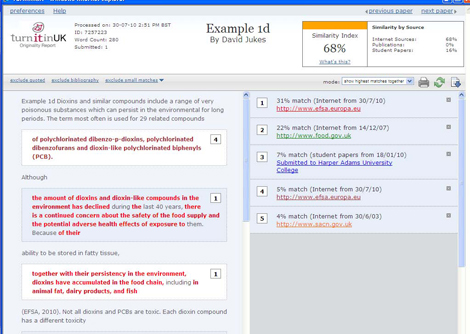 In Example 1d above, the attempt to change some words has brought down the Similarity Index from over 90% to 68% but the main copied text has still been clearly identified and it can be easily seen that the student had attempted to hide its use. 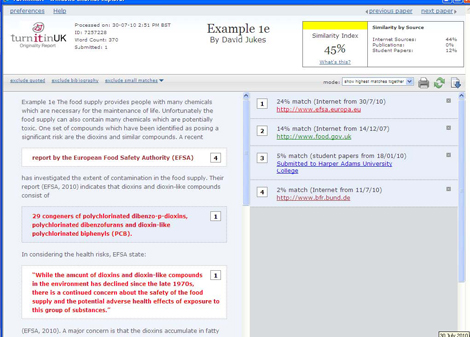 Example 1e above was the attempt to produce an acceptable essay. At 45%, the Similarity Index is still high but this is partly due to the short length of the submission – only about 340 words. In reviewing this submission, it is clear that it has been written with no attempt to hide sources. The sources are described in the text and key blocks of text have been given in quotation marks.