This guide will help you find resources, understand academic and reflective writing and help you prepare for your coursework and exams

A student submitted an essay which the lecturer thought was suspicious and plagiarism was suspected. One paragraph from the essay stated:

Possible risks of fish consumption must be paid attention in the context of possible advantages. There is still strong evidence of potential beneficial effects of fish consumption versus some modest negative studies. The modest fish intake about 1-2 servings per week outweigh the disadvantages amongst adults. This is because there is powerful evidence of beneficial effects of omega 3 PUFA which are rich in oily fish. However, more researches are required to determine and update recent UK advice to allow more people to benefit from increased intake of long-chain omega 3 fatty acids

Notice that no references have been given for this paragraph, which makes it appear as the student’s own ideas. Submitting the essay to Turnitin clearly showed that the paragraph had been assembled from text in two paragraphs in separate references (which had been mentioned in other parts of the essay). These are the two original paragraphs:

“Potential risks of fish intake must be considered in the context of potential benefits. Based on strength of evidence and potential magnitudes of effect, the benefits of modest fish consumption (1-2 servings/wk) outweigh the risks among adults and, excepting a few selected fish species, among women of childbearing age. Avoidance of modest fish consumption due to confusion regarding risks and benefits could result in thousands of excess CHD deaths annually and suboptimal neurodevelopment in children."

“There is evidence that an increased intake of long chain omega-3 PUFA could impact positively on the health of many people. However, more work is needed to clarify and update current UK recommendations to enable more people, even those who do not wish to eat oil-rich fish, to benefit from enhanced intakes of long-chain omega 3 PUFA.”

Another paragraph in the same essay showed the following when submitted to Turnitin: 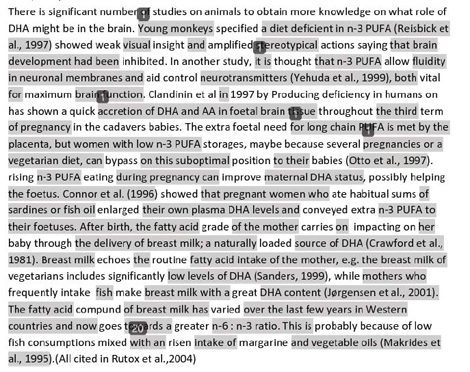 The whole paragraph is taken from 3 consecutive paragraphs in the reference given at the end (Rutox et al, 2004) but the student has tried to paraphrase the text to make it their own. For example, the original text had stated “Young monkeys given a diet ..” whereas in the text above this has been changed to “Young monkeys specified a diet ..”. In most cases it is very poor practice to use references when you have not actually seen them yourself. How do you know that they have been quoted correctly? In this case, the statement at the end ‘All cited in Rutox’ strongly suggests that the student had not seen the references quoted earlier in the paragraph.

Here is an extract from the Turnitin report from an essay (on Australian wines) submitted to another lecturer: 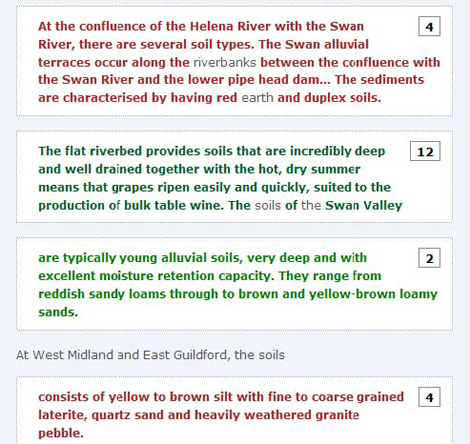 Notice how in this case several paragraphs from different sources have been put together with very little attempt to alter the words. There are also no references which makes it a clear example of plagiarism.