All  maps should have a scale (or state they are 'not to scale'). The scale is the amount of size reduction from the real world to the map.  There are three ways of expressing scale:

This is the ratio between map and ground distance.  It is written as either 1:x or 1/x, where 1 is the map distance and x is the ground distance in the same units of measurement.

eg. Four miles to one inch, One inch to one mile.  More likely to be found on an older map.

This is the graduated line often found at the bottom of a map.  It allows you to work out distances on the map by showing how far a kilometre or a mile actually is. It is particularly useful if you resize a map by scanning or photocopying - the RF will no longer be correct but the scale bar will still work.  Digital maps eg Digimap, will have a scale bar on the screen - it will change as you zoom in. 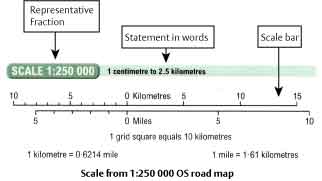 Many people find this terminlogy confusing. Remember that a large-scale map shows  a small area and vice versa.  With a ratio, the closer the denominator is to 1, the larger the scale.  Thus 1:20 000 is a larger scale than 1:40 000.

"The three illustrations describe the relationship between map scale and the size of the ground area shown at three different map scales. The map on the far left has the smallest scale, while the map on the far right has the largest scale. Note what happens to the amount of area represented on the maps when the scale is changed. A doubling of the scale (1:100 000 to 1:50 000 and 1:50 000 to 1:25 000) causes the area shown on the map to be reduced to 25% or one-quarter. (Source: PhysicalGeography.net)"

A map is a flat representation of a curved surface.  The mathematical transformation used to produce this is called a projection eg. Mercator, Lambert, Peters.

There are several websites with information about different map projections:

Search Enterprise to find books which give more information about projections, for example:

The Ordnance Survey produce a number of educational resources including on the basics of map reading.  These explain grid references, contours and using a compass, shows techniques for pinpointing your location, measuring the distance travelled and walking on a bearing.

They also sponsor a number of YouTube videos by Steve Backshall to help you learn how to read your map:

The Ordnance Survey was founded in 1791 to undertake a national survey of Britain.  Up until this point maps were produced piecemeal, on a county by county basis, by different surveyors and to different standards.  The war with France provided an impetus and funding, and the first maps at one inch to one mile, of Kent, were published in 1801.  More detailed scale maps (six inches to one mile or 1:10 560, and 25 inches to one mile or 1:2500) were introduced later, in the mid-Nineteenth Century, as were more generalised scales such as the Half-inch (to one mile) or Quarter inch (to one mile).  In 1897 colour printing was introduced, and after World War II the National Grid was included on all maps.   The late 1940s also saw the introduction of maps of urban areas at 1:1250, and the 1:25 000 scale.  Metrication began to be introduced in the 1950s, with the Quarter inch (1:253 440) series replaced by the 1:250 000 (Harley, 1975).  Digitisation began in the mid-1980s, and in 1996 the publication of large-scale paper maps ceased, replaced by all-digital products.

The Library has maps at all these scales, but complete coverage of Great Britain is only available at one inch to one mile or smaller.  For the more detailed scales, we concentrate on old Berkshire and the area around Reading.

If you want modern paper OS maps, start by looking at the Field map drawers on the 4th Floor. We have complete coverage of Great Britain at 1:25 000 (Explorer and Outdoor Leisure maps), 1:50 000 (Landranger maps) and 1:250 000 (Road maps). Access to the more detailed scales is only available by using Digimap.

Geology Digimap provides map data at a number of different scales from the British Geological Survey (BGS) along with the BGS Lexicon of Named Rock Units and the Onshore Borehole Index.

Most geology maps are accompanied by a memoir or descriptive text giving more information.  They can be found at: LARGE--F 554.2-GRE (England and Wales) and LARGE--F 554.1-BRI (Scotland).  Recently the memoirs have started to be replaced by an A5 booklet called a Sheet explanation.  They are shelved at: 554.2-SHE (England and Wales) and 554.1-SHE (Scotland).

It is useful to be able to distinguish between older geological material (pre-Quaternary) and recent (Quaternary) material, which lays on top of the older rocks and may obscure it.  Historically, recent geological material was termed ‘drift’  and older material was ‘solid’.  Drift  geology includes river gravels and sands, peat deposits, glacial deposits (also called boulder clay) and landslipped materials. Solid geology includes chalk and other limestones, sandstones and London clay.  You will therefore see apparently the same map sheet with different subtitles: Solid, Drift, Solid-and-drift, Solid- with-drift.  If an area has extensive drift deposits then a solid edition may be produced, so that the underlying geology can be clearly seen.  In this case a separate drift edition will also be produced.  More usually a solid-and-drift edition will be the only version.

Since  2004 the BGS have been phasing out use of the terms ‘solid’ and ‘drift’ and replacing them with ‘bedrock’ and ‘superficial deposits’.