We have many maps produced by the British Geographical Section, General Staff (G.S.G.S.), War Office, and by the U.S. Army Map Service during the years 1939-1945.  In addition, we have some maps produced by the German authorities (Chef des Kriegskarten und Vermessungswesen, Deutsche Heereskarte).  The majority are in Europe, but we also cover parts of Africa and Asia.

Maps can be used to help interpret documents and texts, especially where villages and landmarks have disappeared and road or rail networks have changed.  What we have are not all ‘military’ maps (those with additional military annotations or information), but they are topographic maps, so show the contemporary lie of the land; towns and villages, communications, forested areas and so on.  Often they are reprinted from pre-war national maps, sometimes they are reprinted from captured German maps, and they may have a military grid overprinted.  The British G.S.G.S.  and the United States A.M.S. maps often produced maps in the same series, so a map series may have both types of series designations.

Publishers designations:
Alpha-numeric code on the map e.g. GSGS 2957; AMS M508, MDR 1510, HIND 1035.  May have more than one, eg GSGS 8061 is also MDR 1510 (MDR stands for Middle East Drawing and Reproduction).  A list of British military Publishers’ designations can be found online. 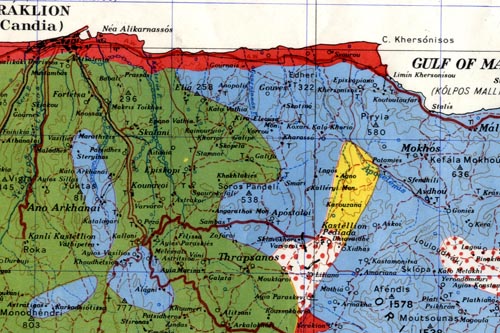 This extract shows part of the island of Crete, from the topographic series Greece 1:250 000, GSGS 4410D, published 1943. It has an overprint  showing 'soils as affecting Going for tracked vehicles'.  It is a quite broad classification and the key includes qualifications, so blue shows the going to be bad at all times, but the key indicates that there may be some fair going under 600 feet.  It also indicates the geology, and classifies the roads by width and whether or not they are 'all-weather'. Cart tracks, railways and telegraph lines are also shown, and the map makes clear that information included may be unreliable. 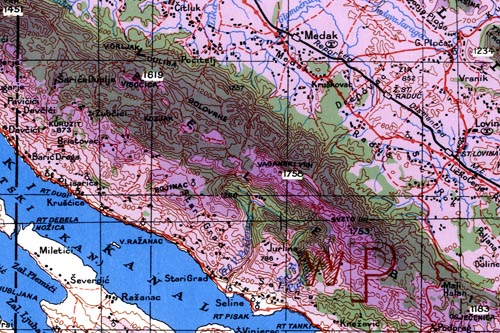 This extract shows part of coastal Croatia from the series Yugoslavia 1:250 000, GSGS 4413, published 1944. As a topographic map, it shows roads (classified by width), railways, forested areas, marshes and buildings. Height is indicated by contours and colour tints. Normally these colours would be shades of yellow/brown, but this is an army/air style edition, which were specially adapted to be clear and legible when used by air crew at night. As aircraft had an amber light in the cockpit, the height information was given in shades of purple, which were easier to distinguish. 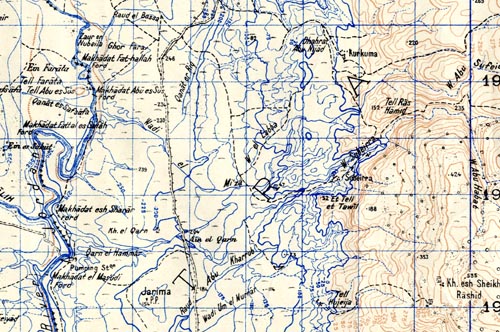 This topographic series was produced originally by the Service Géographique des F.F.L. (Forces françaises libre) in 1944, and reproduced with minor revisions by 512 Fd. Survey Coy., R.E. in 1945 (MDR/1510/4144). It is in French and English and indicates land use (woods, scrub, vinyards, olive groves) as well as roads, tracks and paths, rivers and buildings.  Relief is shown by contours, and these are coloured brown (above sea-level) or blue (below sea-level). It has a military grid (in blue) added. 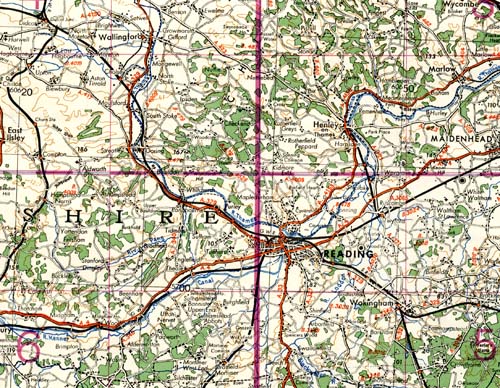 The extract is from a German map of 1943, showing the Reading area (sheet M30 NO2 London (West). It was derived from a 1935 Ordnance Survey map and is marked as a Fliegerausgabe (Flight edition), so was intended for use in aircraft. It has a pink military grid overprinted.